Amid denuded trees and muted skies, winter can feel like nature’s hiatus before the frenzy of spring. But for those of us who relish time in the mountains, winter is a sensory feast, when the stark landscape sharpens our senses and we become attuned to minute changes in our environment. Flashes of colour enliven a monochrome palette as fellow travellers chart their own adventures; air, fresh with ozone, has the clarity of a bell; the caustic glare of sunlight on fresh snow gives away to alpenglow, igniting the distant hills; rimed up buttresses are alive with the dry rasp of crampons on rock and the festive jangle of harnesses laden with gear and axes hacking enthusiastically at ice-choked cracks; the rhythmic squeak and crunch of skis on snow is a soothing distraction from frozen fingers and burning muscles.

Here in the northern Cairngorms, Arctic tundra stretches as far as the eye can see towards the eastern seaboard. With few features to buffer the wind, it drives relentlessly across the plateau at an average speed of 33 mph. At Cairngorm summit on 20 March 1986, wind speeds reached hurricane force and a record 173 mph. This region of the Highlands also lays claim to the UK’s coldest ever recorded temperatures: a bone-shattering -27.2 °C in Braemar on 11 February 1895 and again on 10 January 1982. (The same temperature was also noted in Altnaharra on 30 December 1995.)

During a project to compile the first Historical Thesaurus of Scots, a study by the University of Glasgow discovered over 400 words and expressions for snow across Scots dialects

Scotland’s maritime climate and volatile weather conditions present both risks and opportunities for hillgoers in winter. The thick comfort blanket of snow enveloping the rolling plateau belies its unforgiving nature, and like a mythological siren, its beguiling beauty can deceive the unwary. Hardpacked wind slab accumulates on leeward slopes, harbouring weaknesses within its mass; hulking cornices formed by wind blowing over a ridge can dash the hopes of even the most experienced climber on an otherwise straightforward ascent; capricious winds whip away body heat, even when the ambient temperature is benign. Conditions can turn on a dime. The snowpack is a vast, active laboratory, and its ability to shapeshift into entirely new structures catches many a walker, skier and climber unawares. But it’s this transience that compels us to claim first dibs on virgin powder, the elusive swish of skis over surface hoar crystals, or the delicious squeak of solid axe placements in consolidated névé. 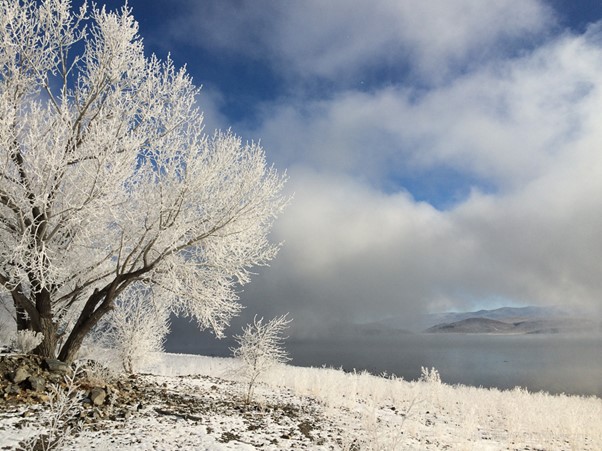 Of all the visual representations we associate with this season, snowflakes epitomise the beauty and fragility of our winter mountain environments. As a snowflake falls, myriad changes in temperature and humidity in its surrounding environment produce structures of infinite variety and intricacy. Their only commonality is their hexadic form, which enables water molecules to configure in the most efficient way.

Tree-like dendrites are classic snow crystals beloved of fairy tales and Christmas cards. But snowflakes have many forms, all of which influence the overall structure of a snowpack and our ability to enjoy the mountains safely.

Hoarfrost, which forms on surfaces whose temperatures are lower than the frost point of the surrounding air, occurs when vapour becomes solid, skipping the liquid phase. Comprised of interlocking ice crystals, it tends to form on objects freely exposed to air, such as wires, poles and tree branches—otherwise utilitarian structures can be transformed into beautiful sculptures.

The needle-like crystals of surface hoar grow rapidly on snow that is colder than the surrounding atmosphere. Subsequent snowfall can bury these crystals, incorporating them into the snowpack where they can form a weak layer.

Unlike surface hoar, depth hoar forms when the ground loses heat into the atmosphere and vapour rises through the snowpack, crystallising into plates or facets which are usually poorly unbonded―or unsintered―to adjacent crystals and therefore present a higher avalanche risk.

Being in the business of words, I’m always fascinated by their origins and the ways in which their emergence and common usage are influenced by the complex interplay of factors as diverse as culture, geography, topography and climate.

During a project to compile the first Historical Thesaurus of Scots, a study by the University of Glasgow discovered over 400 words and expressions for snow across Scots dialects, many of which are derived from Old Norse. Weather has always been an integral feature of people’s lives in Scotland and our ancestors developed precise terms to describe their deep-rooted relationship with the land and the subtle changes in the elements that could dramatically affect their livelihoods.

The expressions we have for snow are often onomatopoeic, with a rhythm and tempo that convey its unique properties and reflect our sensory interaction with it. It is often possible to glean the meaning of these words without knowing precisely what they represent, simply by their phonetic qualities and the mental imagery they conjure. Slush is perhaps one of the most pedestrian, capturing the sibilance of movement through dense, wet snow, while the softly rolling smirr calls to mind fine sleety drizzle on the skin. Unbrak―the beginning of a thaw―connotes fractured ice after a long hard winter.

It’s unsurprising that the lyricism of some of these expressions and the feelings they invoke are translated into poetry and literature. The coarseness of spitters―small drops or flakes of wind-driven rain or snow―is brought to life in the phrase: ‘The blatchy rains, or chilling spitt’ry snaws’ (Scott, 1805). Frivolous, drizzly rain or snow may be a flindrikin or a sneesl:

A caald wind, a sneeslin o easterly rain, piled clouds,
made da park we were wirkin in an uncomfortable spot

Sometimes, you may find yourself enveloped by a dizzying swirl of snow or feefle, or in the liminal state between heavy snowfall and a blizzard, which is known in some regions as an onding. And who has not felt the panic of being caught in a squall, a sudden surge of wind lasting several minutes, often during a snowstorm? It probably has its roots in the word skvala, an Old Norse word meaning, literally, ‘to squeal’. By another version, it is an alteration of squeal influenced by bawl.

Grue has several distinct meanings but, despite its versatility, it seems to have faded from our vocabulary. Grue functions as both a verb, meaning ‘to shiver or shudder, especially with fear or cold,’ and as a noun, meaning ‘gruesome quality or effect’. It also refers to thin, floating ice, conjuring images of meagre, Dickensian fare:

Thro’ driftin’ snaw, an’ blashie sleet,
Puir bodies wade, an’ grue, an’ grane;
Then comes the white-pow’d warlock frost,
An’ a’ he touches turns to stane.

Even individual snowflakes have their own language, from a skelf to a flaucht, whose present participle floughting means to fall in flakes:

In addition to our home-grown terms for snow, there are imports from farther-flung lands in our repertoire, such as sastrugi: elegant, wind-sculpted grooves and ridges facing into the prevailing wind, often on mountain ridges. Sastrugi is the plural of sastruga, which is a German transliteration of the Russian zastruga. The German language has also given us graupel, which derives from the word for pearl barley and refers to snowflakes that have become rounded, opaque pellets, a little softer than hail. A personal favourite, penitentes are elongated, closely spaced blades of hardened snow or ice, resembling sinners forced to endure the unforgiving glare of the sun at altitude. Firnification is a melodic term for the process of névé becoming dense granular snow before it consolidates into glacial ice through nivation.

Like snowpacks and seasons themselves, language is forever in flux. Over time, long-term changes in our climate and social structures may lead to some of these distinctly localised expressions falling by the linguistic wayside, and the emergence of new words and phrases to describe our intricate relationship with winter.