Profile of a Mountaineering Prodigy

Tom Patey was one of a kind. Deziree Wilson explores why his remarkable achievements made him the perfect subject for our latest biography, One Man’s Legacy.

If you’re a climber based in Scotland, it’s almost impossible to avoid following in the late Tom Patey’s footsteps. Widely acknowledged as one of the leading Scottish mountaineers of the last century, so many of his routes live on in our collective consciousness thanks to their inventiveness, quality of lines and exquisite locations, notably in the Cairngorms and North-West Highlands, but also farther afield, in the Alps, Norway and the Karakoram. His story is one of pioneering ascents, boundless enthusiasm and a carefree spontaneity that belied a tough fearlessness and exceptional endurance.

A stalwart of 1950s bothy culture, Patey was also a gifted musician, writer and raconteur who transcended social and cultural boundaries with ease. He had the ‘tragicomic gift of the balladeer’, and despite mixing with the privileged classes as a university graduate, Marine and, later, a GP, he would gleefully swat egos like flies with his mischievous brand of satire. But although his collected essays and verses were published posthumously in the celebrated One Man’s Mountains, there has never been a definitive biography about this remarkable individual—until now. 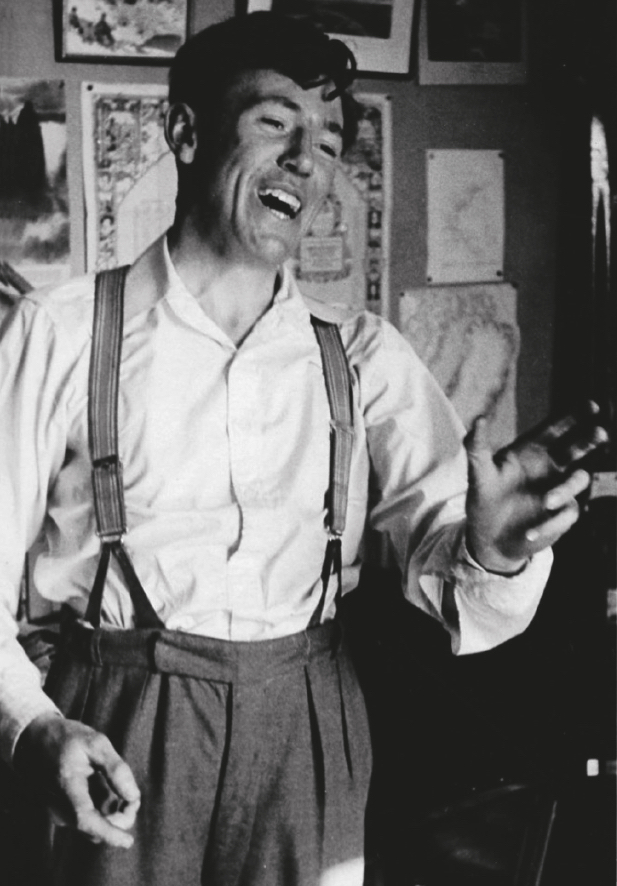 One Man’s Legacy, by Mike Dixon, is the Press’s latest title in the biography genre, and it weaves together the many threads of Patey’s life through his own writing, first-hand insights from his close friends, including Sir Chris Bonington, Joe Brown and Paul Nunn, and unseen archive images from renowned photographer John Cleare and the Patey family. ‘What comes across in all his accounts is someone having enormous fun,’ says Dixon. Patey ‘rejoice[d] in the ridiculousness of the whole endeavour,’ but it’s also clear that he loved the mountains, and set great store by staking his claim on new territory.

The Cairngorms were Patey’s stomping ground from an early age, and when he made the first winter ascent of Scorpion with three others in December 1952, he was already an accomplished and well-established mountaineer. But Càrn Etchachan was yet to have a route recorded on it, and to his commercial, competitive eye, it had irresistible appeal. The climb began chaotically and, in typically disorganised fashion, Patey, who had Raynaud’s Syndrome, had no gloves with him. He borrowed some to tackle the desperate upper gully―the sting in the tail―deploying the adhesive properties of the wool to good effect on slick verglas. A one-handed swing and a tentative pull-up on a finger hold saw him win through—but only just. ‘It’s going to be a right royal route, man,’ he declared later. Scorpion was only the second Grade V to be recorded in the Cairngorms, and it kicked off one of Patey’s most prolific climbing periods.

The following month, with Bill Brooker and Mike Taylor, he made the first ascent of Eagle Ridge on Lochnagar, a great Scottish classic and, for its grade, one of the most outstanding routes in Britain. With immaculate granite and thrilling situations on its soaring crest, it has an ‘alluringly beautiful profile of graceful arêtes topped by sculptured snow and interrupted by precipitous buttresses’. A winter ascent would have seemed incredible to most climbers at the time, but the trio was prepared for the challenge, with several hard recent ascents under their belts. Patey, who had already done it four times in summer, led all the key pitches, using combined tactics to overcome a brittle crux section. Although they had excellent conditions, their ascent time of four-and-a-half hours is testament to a talented team on top form. For many years Eagle Ridge was given a winter grade of V, but its current claim of VI,6 (assuming average conditions) is more realistic.

Next up was Mitre Ridge (V,6) with Bill Brooker in April. Both used a shortened single axe, but while Brooker preferred to be tethered, Patey didn’t like the sliding wrist sling getting in the way and favoured an ambidextrous approach. Normally they would swing leads until things became too technical for Brooker, but as Patey set off on the third pitch towards the first main difficulty, a hold broke off and he fell 5m onto soft snow. He was unhurt but shaken, and Brooker took over and led the first crux chimney. Exhilarating steps led to the col between the two towers and thereafter a traverse across a narrow, crenelated arête offered a thrilling finale to another four-and-a-half-hour odyssey, which completed a trilogy of major ascents that season and added another four-star route to the tally. 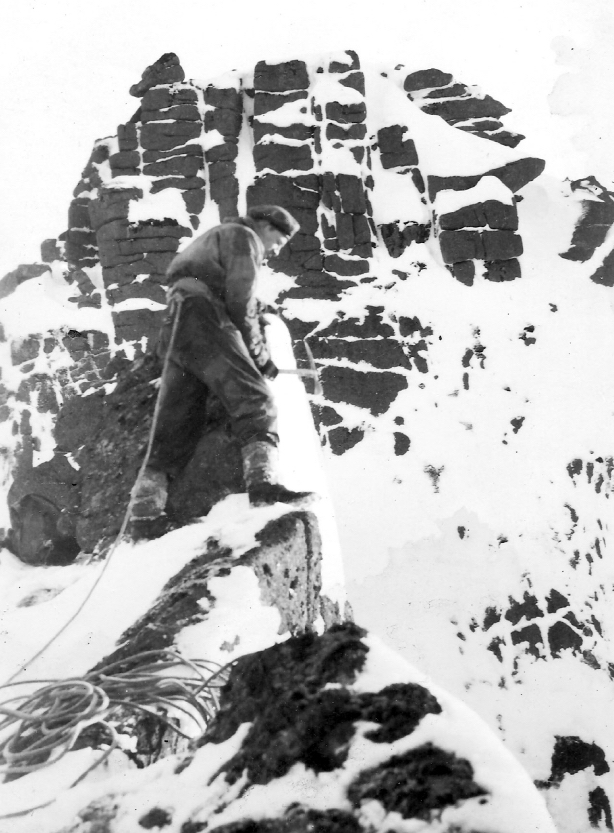 The SMC guidebook to The Cairngorms is littered with Patey’s name, but although he was perhaps most at home in this mountain range, his achievements weren’t confined to its granite cliffs, and he participated in significant ascents elsewhere in Scotland, including the first winter traverse of the Cuillin Ridge on Skye, Zero Gully on Ben Nevis, and March Hare’s Gully on Beinn Bhàn, all of which remain classics of their genres. In standard Patey fashion, the latter was made ‘without ropes, in the dark, and occupied one-and-a-half hours.’

But he is perhaps best known for his epic solo of The Crab Crawl in the winter of 1969, an achievement which even today seems almost mythical, and which shattered mountaineering preconceptions at the time. After walking in with friends on a ‘dazzling day with the snow shining like coruscating jewels’, without warning ‘he just buggered off’, and spent the next five hours on a lonely pilgrimage across the entire face of Creag Meagaidh’s phenomenally exposed Coire Ardair, enduring a mini-avalanche, poor-quality ice, navigational errors and an alarming diagonal abseil off a single shoogly peg hammered only halfway into rock.

This spectacular feat epitomised Patey’s climbing style. Although he favoured functional, inelegant efficiency over what he called ‘dynamic posturing’, Rusty Baillie once commented that he ‘climbed with such intuition and confidence that it seemed magical—his ability to get up steep ground didn’t seem to depend on textbook techniques or tool placements but on the mystical cliché of “being one with the mountain”.’

Patey was equally enthusiastic about rock climbing, and he gave his name to some of Scotland’s best summer lines. Squareface, a three-star V. Diff. high up in the remote Garbh Choire of Beinn a’ Bhùird, which he climbed with Mike Taylor in July 1953, satisfied his quest for climbs with ‘atmosphere’. From head-on, it appears as though any route up the blank-looking face will be extremely severe, but the slab is, in fact, generously furnished with holds, and it’s often combined with Cumming-Crofton Route on Mitre Ridge to give a tremendous day out in the heart of the Cairngorms.

Over west, the Cioch Nose on Sgùrr a’ Chaorachain in Applecross is arguably one of the best Severes in Scotland. Our latest Wired guidebook, Scottish Rock Climbs, gives it four stars and describes it as ‘excellent rough sandstone—beautifully clean on its upper face’. Despite its forbidding appearance the Cioch Nose is surprisingly amenable with ample holds and superb views, and Patey and Chris Bonington originally graded it V. Diff., even though they made the first ascent in the rain. Bonington stands by the original grading, and is adamant that the ‘top bit must be one of the most beautiful Diffs in the world’.

Patey is also famous for having pioneered many of the first ascents on the sea stacks studding Scotland’s coastline, including the Old Man of Hoy and Stoer, and Am Buachaille, all of which feature in Guy Robertson’s award-winning book, The Great Sea Cliffs of Scotland. The esoteric nature of these venues, and the guile and commitment required to tackle them, perfectly suited Patey’s exploratory spirit and sense of adventure. After so many years successfully pitting his wits against hostile elements on the most challenging routes, his fall from The Maiden sea stack in 1970 after a straightforward ascent seemed cruelly ironic, and too abrupt a conclusion to such an auspicious life.

One Man’s Legacy is available for pre-order with delivery to the warehouse expected at the end of November. Shipping will begin as soon as it arrives. Use the discount code PATEY to receive 10% off.

After many years in adventure education and broadcasting, Deziree returned to university in 2018 to complete a master’s degree in journalism. She now works as a freelance writer, editor and illustrator, but continues to spend as much time as possible climbing, skiing and mountain biking in Scotland and the Alps.