This month at the Press, we’ve been contemplating the theme of connectedness with wild places that runs through our publications. Despite the diversity of voices and activities across our books and on our Creatives platform, all our authors and contributors share an ability to capture and convey a sense of synchronicity with the mountain landscape, of being subsumed within it. In this article our editor Deziree explores this further.

There are as many ways of feeling connected to the mountains as there are people exploring them. For some, it’s about escaping the cacophony of everyday life and finding silence and solitude to gather or quieten one’s thoughts. Or gaining fresh perspective from ‘the purity of simple existence in beautiful places’ and wide open spaces, and being surrounded by something bigger than oneself. Others find belonging within a community which shares values about how to make sense of the world and find meaning in it.

The latter was a driving force for Lovat Scout Syd Scroggie, who continued to venture into the hills with companions until well into his 80s, despite having lost his sight and one leg in the Second World War. In his wonderfully evocative account of Scotland’s bothy culture, The Cairngorms Scene and Unseen, he writes that:

It is not the visual side of things in the hills that constitutes the profoundest aspect of the experience, any more than it is the croak of the ptarmigan, the scent of the heather, the feel of the granite under your fingers, or any other of the merely physical phenomena which are part and parcel of the hills. What draws you there is an inner experience, something psychological, something poetic, which perhaps cannot be fully understood when the physical aspect of things gets in the way.

Like Scroggie, Tom Patey thrived on the camaraderie of bothy culture. In his 1962 essay Cairngorm Commentary, Patey observes that:

The Cairngorm climbing fraternity has always been a closely-knit community linked by similar ideals and aspirations. Good climbing and good company often go together: each is essential to the enjoyment of the other. In the Cairngorms, they are inseparable.

Of course, not all encounters with wild places are unequivocally pleasurable. For those pursuing adventure at the very limit of their ability, the vitality of existence is perhaps most keenly felt when skills honed during a lifetime’s devotion to their craft align and, with senses singing, they occupy the liminal space between success and disaster.

In The Great Sea Cliffs of Scotland, Guy Robertson captures the need to court risk, the better to feel alive:

With my eyes closed at first, face pressed down onto the cold flat stone. Then slowly, carefully, I inch forward until head and both arms are extended out over the abyss. Silence is then replaced by the ocean’s loading chorus; a thousand whispers carried up on the cold sea air … My stomach turns, I lose my place, vision churning like the waves over a thousand feet below. Something intangible tugs at my fingertips, dragging my body out over the edge. Stop! Eyes clamp shut then, tight and safe, the churning slowly recedes. Just the howling whispers and faint whiff of seaweed streaming up from the depths.

Julian Lines, who has spent much of his climbing career soloing some of Scotland’s hardest routes, writes in Tears of the Dawn of ‘the molecular bond between the rock and a whirling vacuum of remorse’, where time stands still and there is no room for error. ‘Sinews strained … every nerve cell monitor[ing] any unwanted shift of balance … I bridged the void with pinpoint accuracy … I dared not breathe as I reached upwards in one slow, yearning stretch’. 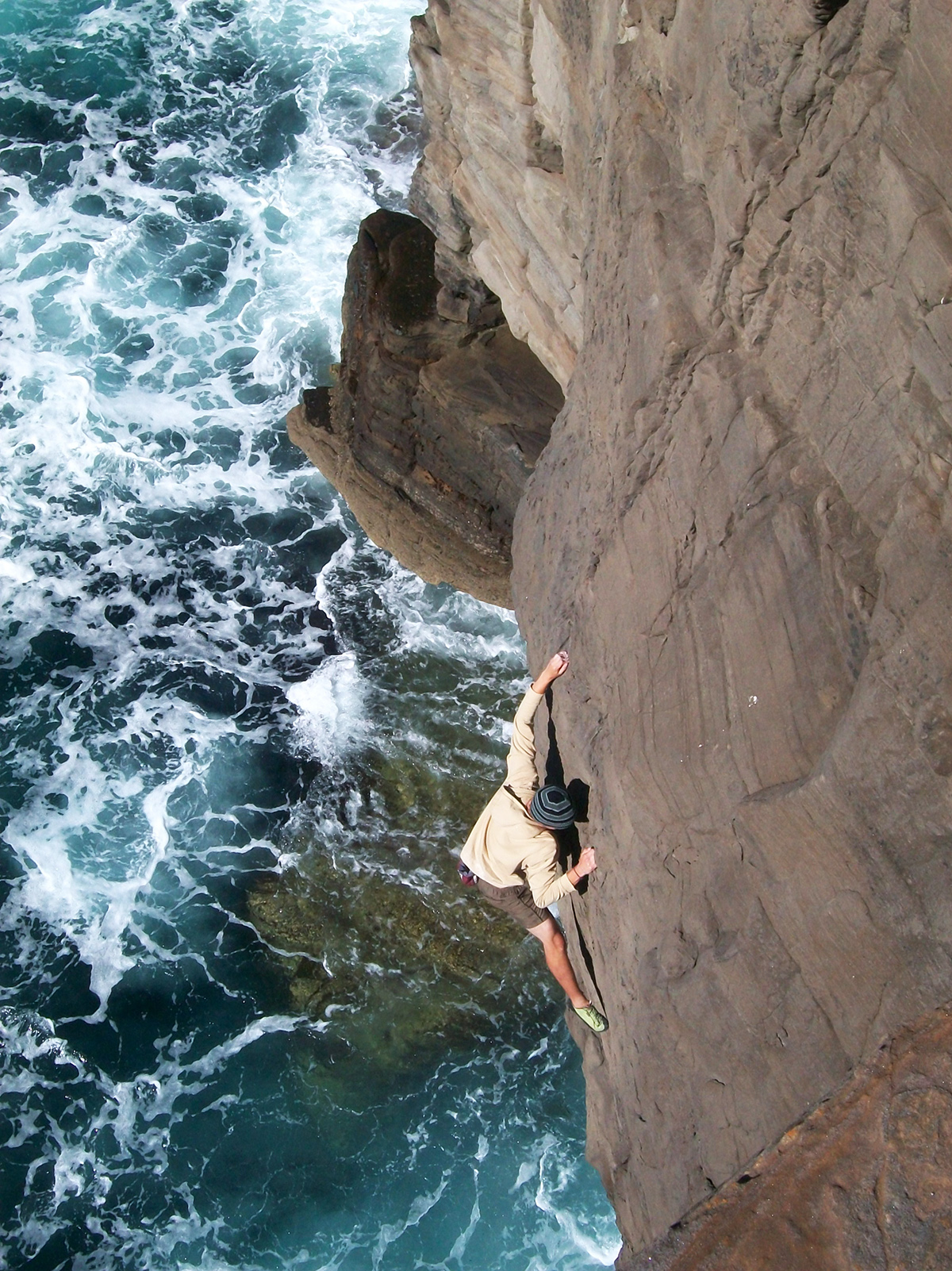 What we sometimes call the flow state that arises from absorption in an engrossing activity like climbing can feel meditative. Lines encountered a similar feeling of suspended animation while soloing March Hare’s Gully on Beinn Bhàn in poor winter conditions:

My body pulsed with the superhuman strength that manifests itself when self-preservation is the only thing that matters … With the assistance of the rapid influx of adrenalin, I … struck my way higher and higher up the gully. I was beyond caring about anything. Hundreds of vertical feet passed by—the route was endless. My mind was blank, for now I was absorbed in ice climbing in its rawest form. Time passed—minutes, hours, I wasn’t really sure—but then the sky began to brighten. I wondered if I had actually been climbing all night and morning had arrived.

I’ve often wondered whether the mountains offer spiritual succour in an increasingly secular society. Beauty and wonder allow us to transcend the quotidian, and it’s perhaps no surprise that many climbing venues draw on terms for religious architecture: think Church Door Buttress on Bidean nam Bian, The Cathedral on Lochnagar or Pulpit Rock on Loudoun Hill. There are also theological connotations in route names such as Redemption, Resurrection and Requiem.

Even Hamish MacInnes, a self-confessed nonbeliever, admitted to being profoundly affected by his first glimpse of the Matterhorn, which he described as ‘an elegant, celestial finger pointing to the heavens‘. In The Fox of Glencoe, he recalls in somewhat metaphysical terms his first ascent of Couloir Peak in New Zealand:

As I crunched my way across névé in a still dawn with the Southern Cross suspended in the heavens above me, I mused that there is something to be said for the contemplative life of the sadhu: the silence and overpowering sense of, not quite tranquility, but I suppose presence that is felt by devotees and ascetics of any calling. There was something meditative about the rhythmic rasp of my crampons biting into the pristine snow.

Metaphorically, ascending a lofty peak seems to take us beyond the corporeal, but our contact with the bedrock or ice underneath our hands and feet is an intrinsic part of the experience, and its density and permanence contrast sharply with our transient digital age.

In Stone, one of our newest Creatives contributors, Alison Roe, writes elegantly about striving to find this solidity after sustaining a head injury that has left her feeling ‘all at sea’ for some time. Her accident:

knocked out much of my short-term memory but … also affected my ability to gather and organise my thoughts … my experiences are evanescent, dissolving almost as soon as they form … the outlines of my life receding before my eyes like a coastline fading into fog.

Recounting her ascent of Spidean Coinich—the smallest of the three Corbetts that comprise Quinag in Sutherland—she describes walking on a ’tilted plane’ of greyish white Cambrian quartzite overlying the red sandstone, its great slabs and boulders gleaming against the dull brown patches of peat and heather creeping across it. Like ‘a petrified wave that doesn’t break but will carry me indefinitely, faithfully on,’ the mountain represented for her ‘a fixed mark in a fluid landscape’, offering a groundedness she has struggled to find elsewhere. Finding a big flat slab, she lay along it and rested her head gently upon it, feeling the cool touch of the stone consolidate her:

the solidity and mass of the mountain … strengthening my molecules, raising and sharpening my spirit … For the first time since I fell, I feel focused and forceful and, precipitating out from this … a steep sense of joy. 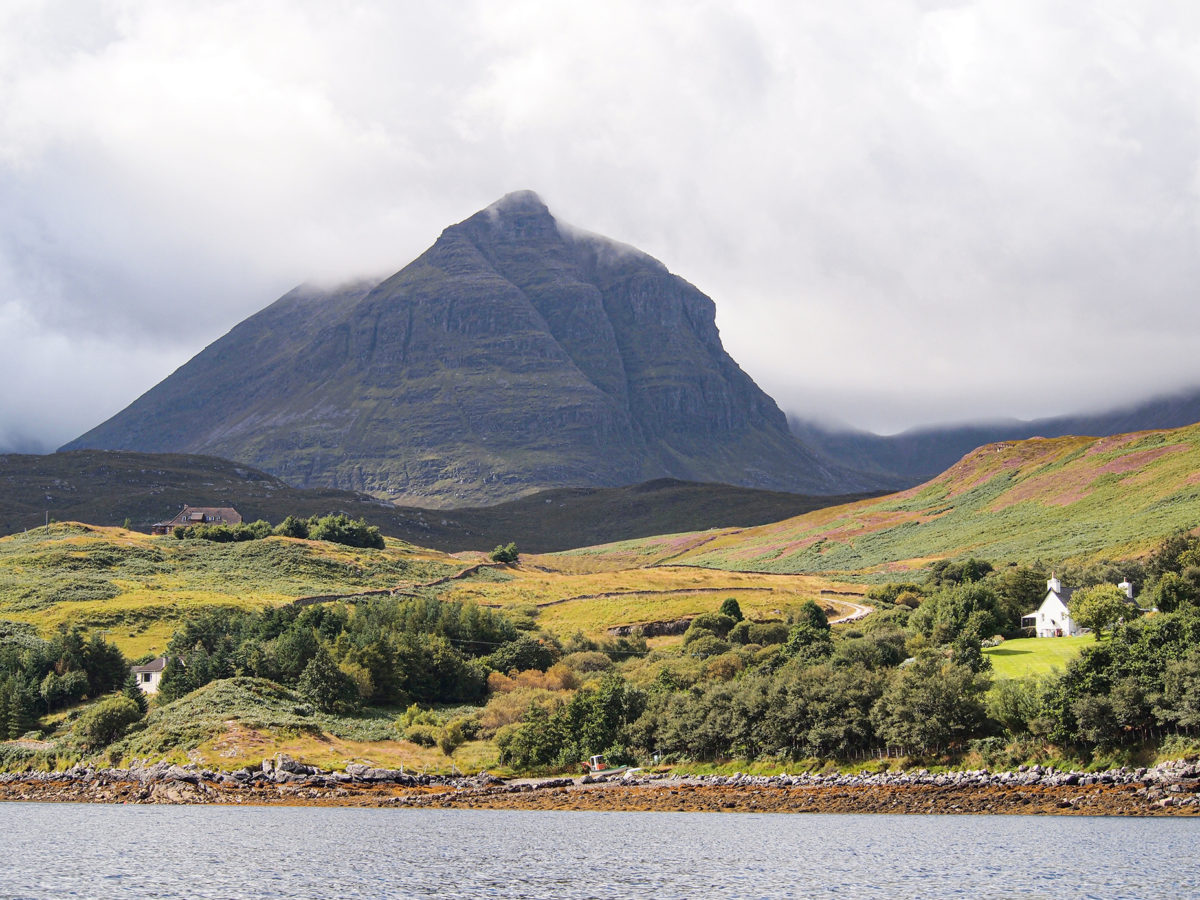 Roe’s descriptions of her temporal bond with the mountains speak of their restorative influence, which can nourish those who don’t have the means or ability to physically access them. The poet Lindsay Oliver, confined to a wheelchair since 2019 after being diagnosed with multiple sclerosis, finds solace in her memories of past times spent in wild landscapes. In her Creatives submission I Thoucht the Warld Wid Fa, written in Doric, she mourns no longer being able to visit the hills she loves, but speaks movingly of a continued bond that sustains her:

Though I canna ging, an I canna stand in yer
caul caul blue, nor swim in yer deepmaist
waaters, I’ll no soon forget the pit
o ma aine despair, nor thon May
day, fan jist the thoucht o ye let me be
lifted, lifted up. Ye’ll

no stairt fae a doverin dream oh hills that haunt
yer wakin oors an keep ye fae yer rest like me.
Ye’ll no greet till
ye hivna ony mair tears the
wye I did thon awfie day
fan I was telt I
couldna walk. I thoucht I’d sooner dee.

an strength ti draw it. Fan ithers walk aside yer waaters ye’ll
no catch a glimpse o me, but there I’ll be, as I haunt
the hills, corries, glens shut aff ti me
in aa but ma aine funcy noo.
Cry me fey if ye maun I dinna care for
I hiv fun a wye ti ging til ye Loch A’an noo an fir evermair 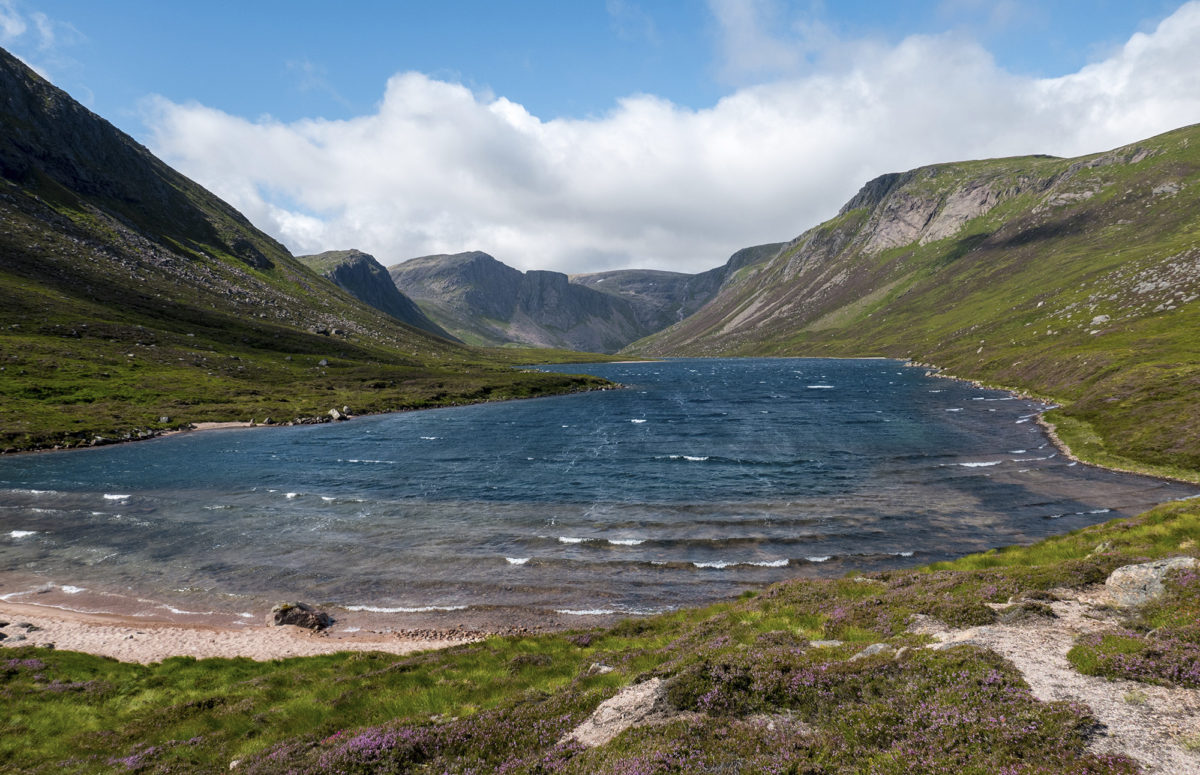 Throughout all of these narratives, I am struck by the myriad ways we find meaning in the mountains, and how our feelings of connectedness with them span activities and don’t depend on skill or technical ability. As we expand as a company and broaden our readership in the coming months and years, we hope to curate and publish more of these experiences. If you have stories, poems, images, films or artwork you‘d like to share, we’d love to hear from you.

Deziree Wilson is an editor at the Press. After many years in adventure education and broadcasting, she returned to university in 2018 to complete a master’s degree in journalism. She now works as a freelance writer, editor and illustrator, but continues to spend as much time as possible climbing, skiing and mountain biking in Scotland and the Alps.