A Date with The Dagger

Having completed editing work on the forthcoming biography on Tom Patey, Deziree heads into the heart of the Cairngorms to revisit one of Patey’s historic first ascents in his old stomping ground.

After spending the best part of a year editing Mike Dixon’s biography about the renowned Scottish mountaineer Tom Patey, I wanted to do something special to celebrate the book’s completion. I’m lucky to live in the Cairngorms, whose nooks and crannies Patey spent so much time exploring, and climbing one of his own routes in the heart of this mountain range seemed a fitting conclusion to the project.

Shamefully, I’d never climbed on Creagan a’ Choire Etchachan, although I’d hiked up the surrounding hills, so, on a glorious summer day, I set off with my husband and our friend, Clare, in search of The Dagger, a three-star HVS* whose sweeping right-hand corner gives a classic mountain pitch.

Although it was a long walk-in—around three hours—the distance as the crow flies from Cairngorm ski car park is not so great. Save a herd of reindeer near Coire Domhain, we saw few fellow travellers along the way. We scrambled down from the top of Càrn Etchachan to Loch Etchachan, whose burn feeds into Derry Burn then Lui Water before meeting the River Dee, and as we topped up our water bottles, I noted that this spot lies almost equidistant from Aviemore and Braemar. Looking in all directions from here, I could make sense of the overall topography of these mountains, and my place within them, much more clearly.

After gearing up and stashing our rucksacks, we skirted round the base of the cliffs and gazed up at a ‘magnificent sweep of clean, crimson slabs 100m wide and up to 150m in height’. To the right of these, two great corners break the continuity, and The Dagger follows the rightmost of these.

A pleasant introductory pitch led to the main event: the intimidating-looking corner, split by a yawning crack whose lower section looked as though it could swallow me whole. I recalled an old black and white photograph of Patey taken by John Hay in 1955, standing where I stood now, in big boots and thick woollen socks, looking upwards as he embarked on its first ascent.

My companions generously offered me the lead, and I pretended to be grateful as I set off, harness jangling with a hefty rack which included a double set of cams. Even with freshly resoled rock shoes, slick half ropes and all the knowledge that had been gleaned by others over the course of 70 years, I still felt the old, familiar tug of anxiety about tackling an unfamiliar route in a remote setting.

Soon fully engaged in the tussle, I was too absorbed in trying to fathom my next moves to consider what it must have been like to be the first to stand on these tiny incuts, jam fists in the crack and layaway on its knife-like edges. The climbing was strenuous, and my style less then elegant. At the crux, where the crack narrows, I arrived at a battered peg, which Patey had hammered in and used for aid. Confronted with the physical evidence of his presence here, the span of time seemed to fall away. There was something about clipping that old peg and contemplating the same footholds as he had all those years ago that I found profoundly reassuring, and strangely moving. A sense of permanence amid the transient chaos of today.

The skirmish finally over, and feeling significantly lighter from having emptied most of my rack into The Dagger’s maw, I arrived at a huge spike belay, whose in situ abseil tat inspired little confidence. Using my own rope instead, I took a hanging stance and spent the next 20 minutes fidgeting as the midges launched an attack and I tried to find a position that would allow me to retain some circulation in my legs. As I brought up Mark and Clare, I looked wistfully down at our rucksacks―which contained two full bottles of midge repellent. 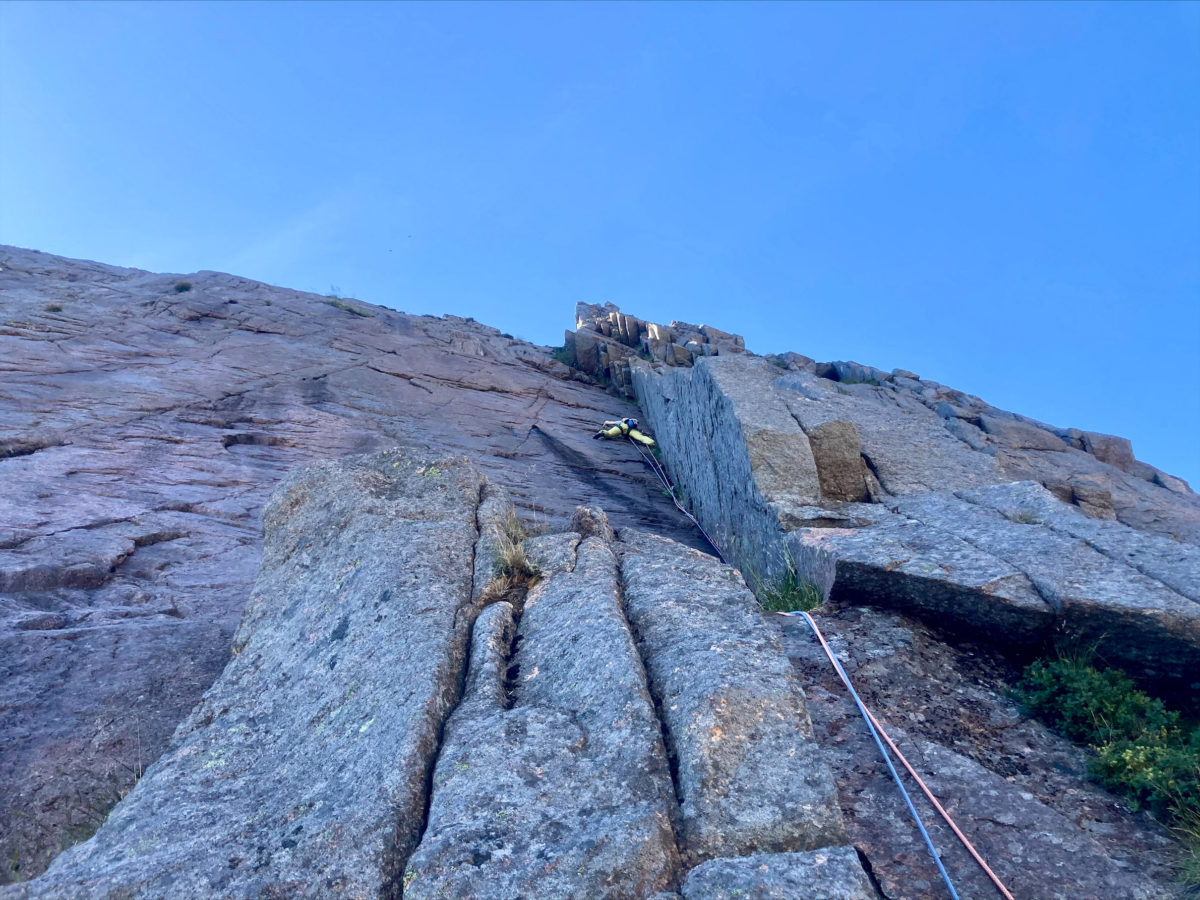 Deziree climbing the main corner of The Dagger © Mark Chadwick

As is often the case in the Highlands, the only other people on the crag were well-kent faces: Wilson Moir and Niall Richie from Aberdeen, who were on an adjacent line which shared our belay. It soon felt very sociable, with five of us―and the midges―all jammed into the same pokey niche.

Having completed the meat of the route, and eyeing the scrappy-looking ground ahead, I was intent on abseiling back down from here, with a view to possibly reascending Scabbard, a two-star VS to the right. But to my dismay, Clare, for whom a full day in the mountains is a rare occurrence, was keen to top out. I could hardly argue after having landed the plum pitch, so Mark and I resigned ourselves to further mauling as she cheerfully quested off towards a clump of vegetation. Luckily, it was technically straightforward, and Clare is a handy climber, so our torment was short-lived. And when we arrived at the top to a fresh breeze, we all agreed that it’s far more satisfying to complete the full route, even when the upper pitches are disappointing.

The long walk out under a blazing sun gave me plenty of time to contemplate Patey’s brief but brilliant life. Modern climbing is an entirely different proposition from the days before sophisticated equipment, reliable forecasts and detailed guidebooks; in many respects, they’re not really comparable at all. Despite the intimidating appearance of The Dagger, I had been secure in the knowledge that, at HVS, it must be fairly amenable. At the time of the first ascent, there was not a single climb recorded on these slabs, and Patey and Hay created the most sustained route at that grade in the range. I imagined venturing there speculatively and giving it a go with such unwieldy footwear and rudimentary gear as Patey had had available to him―and promptly dismissed the idea. This, I think, is one of the reasons we hold our climbing forebears in such high esteem. Patey rarely climbed technically harder than HVS (he was only involved in six Extreme ascents), but he soloed at a grade similar to what he would lead, often without any prior knowledge of what lay ahead. His exploratory spirit and sense of adventure were of a different order of magnitude from that of most climbers, myself included, who value the advances in our sport which allow us to tackle technically challenging routes relatively safely. That’s not to diminish today’s achievements in any way, for the rapid rise in standards across climbing in recent years is to be celebrated, but it’s nevertheless humbling to acknowledge the efforts and achievements of those early pioneers.

Lead image: The Dagger on Crimson Slabs, late ’50s style. Note the use of Vibrams instead of nails © John Hay

After many years in adventure education and broadcasting, Deziree returned to university in 2018 to complete a master’s degree in journalism. She now works as a freelance writer, editor and illustrator, but continues to spend as much time as possible climbing, skiing and mountain biking in Scotland and the Alps.